SEOUL, South Korea, May 12, 2021 /PRNewswire/ — The Sunhak Peace Prize honors distinguished individuals or organizations that have contributed significantly to peace and to the welfare of future generations. In particular, the Committee considers three core areas of accomplishment in the evaluation of candidates: Sustainable Human Development, Conflict Resolution, and Ecological Conservation. Sunhak laureates are selected biannually by an international committee, and receive an award in the amount of $1,000,000. 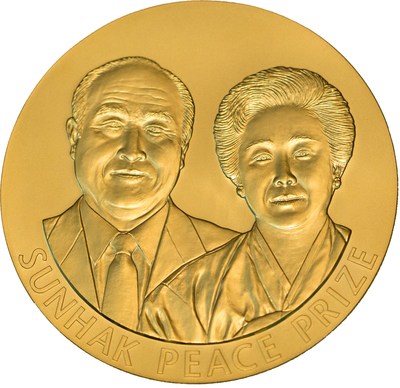 Dr. Hak Ja Han Moon founded the Sunhak Peace Prize to continue the legacy and vision of her late husband, Rev. Dr. Sun Myung Moon, who founded the Universal Peace Federation and dedicated his life to the promotion of peace. The 5th Award Ceremony will take place in 2022.

Criteria for Evaluation of Nominees:

– Contributions to the areas such as sustainable human development, conflict resolution, or ecological conservation

– Improving the quality of life of people from diverse nations, races, religions and cultures for the sake of peace

The prize committee will decide on the final Sunhak Peace Prize Laureate(s) in December 2021. The official announcement will be made soon thereafter. The Award Ceremony will be held in April 2022, in South Korea. The nomination form can be downloaded from the official website (http://sunhakpeaceprize.org/).

The first Sunhak Peace Prize in 2015 was awarded to Mr. Anote Tong, former President of Kiribati, for his efforts to raise awareness of climate change and rising sea levels; and, Dr. Modadugu Vijay Gupta, who increased the productivity of fisheries through the development of aquaculture methods.

The second award in 2017, which focused on the global refugee crisis, was given to Italian surgeon, Dr. Gino Strada, and to educator Dr. Sakena Yacoobi.

The laureates of the third award in 2019, which focused on peace and development in Africa, were Dr. Akinwumi Adesina, President of the African Development Bank, and Waris Dirie, founder of Desert Flower Foundation.

The 2020 Sunhak Peace Prize was awarded to President Macky Sall of the Republic of Senegal and Bishop Munib A. Younan, the International Honorary President of Religions for Peace. Marking the centenary of the Rev. Sun Myung Moon, a special Founders’ Centenary Award was presented to former UN Secretary-General Ban Ki-moon.