SINGAPORE, Jan. 14, 2021 /PRNewswire/ — BIGO Technology (BIGO), the company responsible for popular new age communication platforms like Bigo Live (live streaming) and Likee (short-form videos), will host its second annual BIGO Awards Gala at 8 p.m. (GTM+8) on January 21 to celebrate the resilience of its broadcasting community throughout the past year. The event is set to take place through Bigo Live‘s very own Music Livehouse channel (Bigo ID: music), with dozens of broadcasters being recognized and awarded. This year’s theme is “Connecting the World,” so BIGO specifically designed the event to commemorate the platform’s leading streamers from across the globe for just how far they have come during such a tumultuous year. 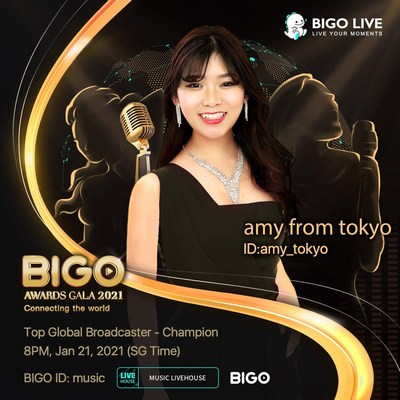 To coincide with the fact that this year’s event is completely virtual, BIGO plans to kick it off with opening remarks from none other than Bigo Live’s own virtual mascot DINO to get the party started. More than 72 families, which are formed by groups of users within the Bigo Live app, and 78 broadcasters will be honored at the annual Gala, with BIGO planning to highlight each person’s success throughout the year. The four categories of award winners are “Top Regional Broadcaster,” “Top Regional Family,” “Top Global Broadcaster” and “Top Global Family;” indicating the best of the best in both individual regions and globally. This year’s selected broadcasters come from 150 different countries and regions around the world.

“COVID-19 has forced us to physically distance ourselves from the people we love most and the vast majority of events have moved to a virtual setting, which has caused live streaming to emerge as the best channel for connecting people from all over the world to share experiences real-time,” said a spokesperson from BIGO Technology. “Despite the pandemic, Bigo Live users have proven that you don’t have to be together physically to form meaningful connections. We’re so proud of how our users have supported each other during such a challenging year and are excited to celebrate the impact they’ve made in connecting the world through live streaming. And because this year’s event is entirely virtual, we anticipate an even larger audience than last year.”

The event will also feature a variety of performances put on by broadcasters themselves, which include fire dances, DJ sets, K-pop dances and Urdu songs. With more than 400 million global users in total, these performances are intended to reflect the diverse and global audiences who utilize Bigo Live everyday. This year’s Gala will also include exciting new ways for the audience to participate in the event virtually. By voting for their favourite broadcasters, families and performances, audience members will get tickets that can be used in the lucky draw in return. Some of this year’s prizes include a Dino pillow as well as virtual gifts like pendants, entrance effects, badges and medals, which are specifically designed for the Gala.

One of the more notable winners from this year’s event was Ami Ohta, otherwise known as Amy from Tokyo, a broadcaster from Japan, was named the number one Top Global Broadcaster on Bigo Live. Aside from engaging daily with her audience, Amy gained her following from livestreaming during her travel before the outbreak of the pandemic. For Amy, the most exciting part of livestreaming on Bigo Live is the PK feature, which allows users to battle each other through various games. She often attends international PK events and she even won the PK World Cup this year.

“I cannot express just how honored I am to be awarded the top global broadcaster at this year’s BIGO Gala,” said Ami Ohta. “With so much going on in the world at the moment, Bigo Live has done an incredible job at keeping their users connected and engaged, and I am thrilled to be recognized for playing a part in that.” 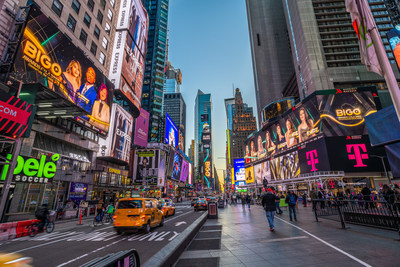 Another notable winner from this year’s Gala was Bigo Live’s top US Broadcaster Megan Nguyen, otherwise known by her streaming name MeganQQ. With around 2 million fans on Bigo Live, MeganQQ gained her popularity through large events on the platform and big box PK. She is also bilingual, so she is able to communicate and connect with a broad group of BIGO’s global audience. “One of my biggest challenges this year was trying to become the top broadcaster in the US, given there are so many other talented and strong hosts in the U.S.” said Nguyen. “I am very proud of the fact that I am currently a top US broadcaster and that my Bigo Live family is still growing strong.”

Each winner will receive a medal and gift box for their achievement, as well as in-app rewards. They will also be featured on a variety of billboards, which are located in landmarks in 23 countries worldwide. As live streaming becomes a leading form of infotainment, the top broadcasters on Bigo Live are becoming celebrities in their own right, with their fans celebrating their success all over the world.

To watch BIGO’s upcoming annual Gala, you can tune in directly via the Bigo Live app which can be downloaded at: https://bigolive.onelink.me/sG8X/2021GALAPRGLOBAL.

BIGO Technology (BIGO) is one of the fastest-growing Singapore technology companies, with more than 30 offices and 6 R&D centers around the world. Powered by Artificial Intelligence technology, BIGO’s video-based products and services have gained immense popularity, with nearly 400 million monthly active users in more than 150 countries. These include Bigo Live (livestreaming) and Likee (short-form video).

Visit www.bigo.sg for more information on BIGO’s brand and products.

Bigo Live is one of the world’s fastest-growing live streaming social communities where users broadcast in real-time to share life moments, showcase their talents, and interact with people from around the world. Bigo Live has around 400 million users in over 150 countries and is currently the market leader in the live streaming industry. Launched in March 2016, Bigo Live is owned by Bigo Technology, which is based in Singapore.