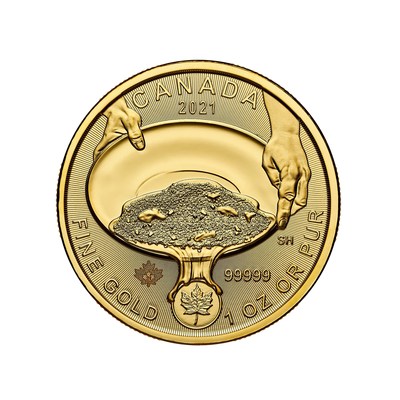 In August 1896, Keish (Skookum Jim Mason), his nephew Kàa Goox (Dawson Charlie), Shaaw Tlàa (Kate Carmack), and her husband, George Carmack, discovered gold nuggets in Rabbit (Bonanza) Creek, in Canada’s Yukon Territory. This amazing find sparked a three-year stampede of prospectors seeking riches in the far northern wilderness. The mining boom it produced put Canada on the map as a leading gold producer and spurred Yukon’s entry into Confederation. It even accelerated the creation of the Royal Canadian Mint’s Ottawa facility and its world-class gold refinery.

The gold rush also had devastating consequences on the local environment and for the communities of original Indigenous inhabitants of the Klondike region. They were displaced and their traditional way of life undermined – a legacy Canada is still grappling with today. 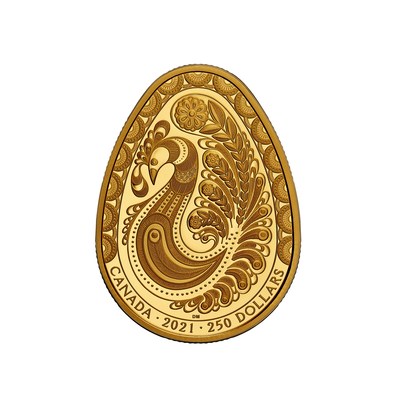 The reverse of this coin features the artwork of accomplished coin designer Steve Hepburn.  His illustration of a miner’s hands holding a gold pan is one of the most enduring symbols of the Gold Rush. The gravel inside the pan and the water shimmering within it as the material is rinsed to reveal precious gold flecks are engraved in exquisite details. Water pouring out of the pan over the coin’s security mark also brings the scene to life.  The coin bears the signature radial lines of all Mint bullion coins, as well as a micro-engraved maple leaf mark showing the number 21 to correspond to its year of issue. It is presented in credit card-style packaging that includes a certificate of purity signed by the Mint’s Chief Assayer.

There are more than three million Canadians of Ukrainian heritage and the time-honoured folk tradition of pysanka, derived from the verb pysaty (to write), still flourishes in Western Canada, and part of Ontario, Quebec and the Maritimes.  It is a spring time ritual where eggs are decorated with intricate designs and patterns using a written-wax batik method. While there are thousands of possible motifs, designs frequently feature geometric and plant themes.

This egg-shaped coin, crafted from nearly two troy ounces of 99.99% pure gold, features a pysanka design by Canadian artist Dave Melnychuk. The central motif of a rooster is a well-known symbol of fertility and reawakening. Its tail feathers are adorned with beautiful sunflowers and each flower has eight petals, a number that is symbolic of eternity and equilibrium. The rooster is surrounded by an Eternal Band (“bezkonechnyk”), with radiating sunbursts that represent good fortune and growth. Each element of this intricate pysanka is engraved in minute detail. The obverse of the coin features the effigy of Her Majesty Queen Elizabeth II by Susanna Blunt.

Images of these new coins are available here.

About the Royal Canadian Mint

The Royal Canadian Mint is the Crown corporation responsible for the minting and distribution of Canada’s circulation coins and provides fully-integrated precious metals services. The Mint is one of the largest and most versatile mints in the world, offering a wide range of specialized, high quality coinage products and related services on an international scale. For more information on the Mint, its products and services, visit www.mint.ca.  Follow the Mint on Twitter, Facebook and Instagram.