ADEN, Yemen, May 6, 2020 /PRNewswire/ — In its first month, the ‘Beautiful Aden’ Cleaning and Environmental Sanitation Campaign of the Saudi Development and Reconstruction Program for Yemen (SDRPY) removed 222% of the total waste expected to be cleared in the project’s first phase, for 120,155 direct and 341,744 indirect beneficiaries of the province. The campaign has exceeded the target of 9,000 m3, removing 21,755 m3 of waste and accumulated garbage from streets and residential areas, conducting drainage operations, and irrigating trees with approximately 1,773 m3 of water. 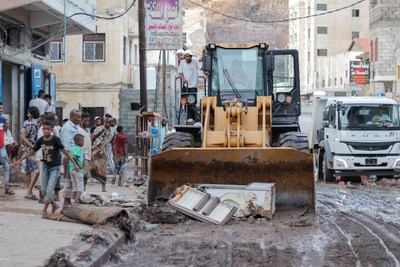 After the most recent torrential rains caused severe damage to Aden, the campaign went beyond all planned goals and stepped up activities through tree irrigation, urgent contribution to floodwater removal, and help for Aden’s residents.

Labor productivity in the campaign has increased on average by 122% through work in 124 blocks at 82 job sites, and average working hours for the program’s equipment and machines has equaled roughly 9 hours per day, with distance traveled exceeding 30,000 km to and from 476 work points. 45 work teams from the Cleaning and Improvement Fund of Aden (CIFA) and civil society organizations have participated.

To raise environmental service efficiency in Aden, the program has provided the city with 22 pieces of heavy machinery and 220 garbage containers, giving full support to CIFA, the responsible provincial authority for environmental sanitation. The program’s equipment and machinery have removed and disposed of waste from main roads and residential areas long neglected and infested due to the spread of disease. The campaign has increased CIFA’s capacity and efficiency by 77%. In the first phase of the project, the campaign targeted Aden’s most needy areas, then expanded work to include 41 workdays in six districts. ‘Beautiful Aden’ has encouraged afforestation and improvement of the urban landscape, using specialized irrigation vehicles provided by the program to water greenery in six districts. Six water tankers – each with a capacity of 5,000 liters – worked in 18 shifts.

Campaign participants form teams from civil society organizations aiming to spread civic consciousness, explaining and educating on hygiene and environmental sanitation. The campaign has stimulated civic involvement by enabling Aden’s sons and families to participate alongside civil society organizations, which play a big role in the supervision of cleaning teams, adherence to schedules, delineation of targeted areas, performance of field surveys, updates of data and completion of work forms.

SDRPY devised an emergency plan to repair damage from torrential rains that occurred during the campaign, coordinating with participants to unblock drains and remove high volumes of floodwater that had closed several main roads. The emergency operation removed 4,316 m3 of rocks and waste and cleared 1,173 m3 of water from main roads and neighborhoods in 5 days at an average of 12 continuous working hours a day. The campaign operates according to an established mechanism to assign and manage work, including field operations management, supervision and direction, to monitor daily quality and efficiency, and to evaluate the extent to which the campaign’s plans and goals are being implemented on a daily and weekly basis.

The ‘Beautiful Aden’ Campaign is part of the Kingdom of Saudi Arabia’s continuous support to the people of the Republic of Yemen in all Yemeni provinces, and fulfillment of the plan of SDRPY, which aims to extend economic and development support in all fields, contribute to improved infrastructure and basic services, and create job opportunities for all Yemenis. SDRPY works to meet basic needs and achieve results that directly benefit the citizen. This is done by forming strategic partnerships with the Yemeni government, local authorities and civil society organizations, and through needs assessments, renovation, rehabilitation and capacity-building support in key sectors.

Israeli intelligence services threatened the Preacher of the Al-Aqsa Mosque, Sheikh Ekrima Sabri, after raiding his house in occupied East Jerusalem. The threat came after Sheikh Sabri said that he will …